The beat of Arab percussion

Brazilian musician Messer di Carlo has studied Arab percussion for seven years. He has been a teacher for four years and will give a workshop at ICAB in Brasília next Friday. 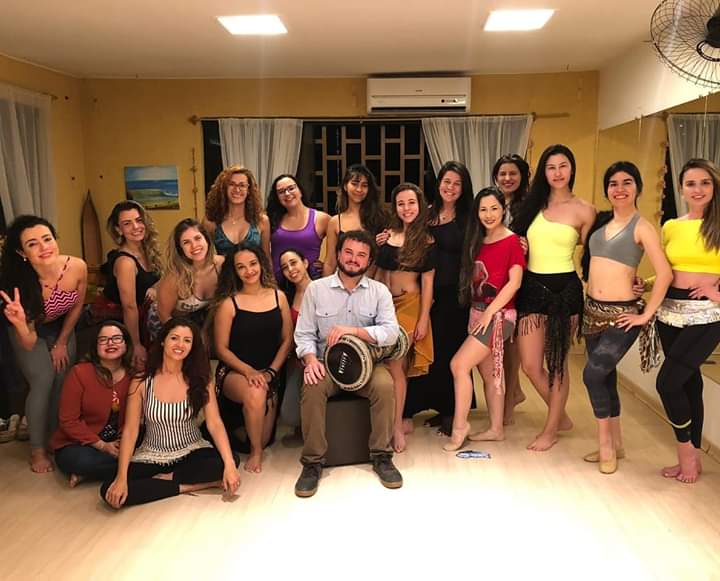 São Paulo – Arab rhythms like maksum, said, masmoudi, muhaijar and zarafat are part of the constant studies of Messer di Carlo. The musician has studied Arab instruments and rhythms for seven years and started teaching four years ago. He’ll bring these rhythms to a workshop at the Arab Brazilian Culture Institute (ICAB) in Brasília next Friday.

He believes that understanding the beat of Arab rhythms is one of the first steps to learn. Most of his students are belly dancers. Their first goal is to tap into the rhythm of their own dance. “Many of them go to the instrument classes later,” he told ANBA. Pictured above, Messer with some of his students. 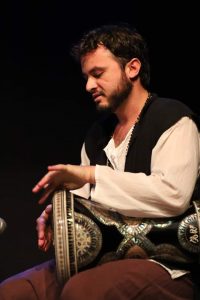 One of the Arab instruments Messer plays is derbake

Born in Brazil, Messer has no Arab descent, but he got his penchant for history from his father. “I’m close to the culture since I was a child. My father was quite an esoteric man, so to speak. And this encompassed all [that he came to study later],” said the musician.

Self-taught, some of his heroes include Arab musicians Faisal Zeidan from Syria, Souhail Kaspar from Lebanon, Kayed Selawy from Egypt, as well as Turkish musician Hakan Kaya. “By seeing some artists such as Faisal, I started learning on my own. Before I even noticed, I was playing and teaching rhythm classes. I think I was 21 when I started playing Arab percussion,” explained the musician, who had started playing the drums when he was 13.

In both his studies and practice, Messer works with one technique. “I have a special feature if you compare to other musicians. I play the traditional style. There’s no fusion of techniques. As a teacher, I also teach the traditional Arab technique,” he says, mentioning both Egyptian and Turkish ways of playing.

Percussion with no instruments

It’s the first time ICAB hosts the workshop, which will offer a certificate and is for people of all levels. The workshop’s intention is taking musical teachings into practice through techniques such as solfège, an Arabic singing technique.

Students may take percussive instruments such as derbak, duhulla, daff, bendir, bongo, snujs, cajón, pandeiro and others. But they are not required to take any material. The workshop at ICAB, as well as some classes by Messes, doesn’t require instruments at first.

The teacher explains that the first step is the voice. “It’s important to learn rhythms. We’ll do part of the solfège technique. Then, we’ll sing the rhythms. And we only use the instruments after we have learned to sing. This technique comes from the East. Singing and then playing,” he explained.

Other ways to learn the rhythms are the body itself. “Clapping in the rhythm works on everyone’s music sense. Whether you have an instrument or not. Many people are interested and doesn’t get the part the of the rhythm. This will allow people to experience the Arab music in fact. From two to 16 tempos,” he says.

Messes also teaches private classes and performs at the Brazilian capital city. “I play samba and other percussion instruments. I have a project called João e Gil, where I play songs by João Bosco and Gilberto Gil. I use an Eastern technique. I use the Arab technique on every instrument and musical style, including samba and MPB,” he detailed.

Check the video below of the musician and some of his students playing Arab instrument derbake.