The pilgrimage to Mecca is restricted to Saudi residents this year. Pilgrims are getting tested for Covid-19 and getting their temperatures taken. They will be required to undergo a quarantine at the end of their journey.

São Paulo – This Wednesday (29) saw the beginning of Hajj, the Muslim pilgrimage to Mecca, Saudi Arabia that’s one of the five pillars of Islam. Some 1,000 masked pilgrims circled around the Kaaba, the Grand Mosque sanctuary, keeping a distance from one another (pictured above). They all took Covid-19 tests and had their temperatures taken prior to arrival. Pilgrims were also quarantined upon arriving in Mecca. Health workers sanitized all luggage, and pilgrims will be required to observe another quarantine once the event is over.

Health and safety staff disinfected the area surrounding the Kaaba – a building at the center of the Grand Mosque, towards which Muslims worldwide turn to pray each day.

Hajj authorities have cordoned the Kaaba this year, and pilgrims won’t be allowed to touch it as usual, to prevent infection by Covid-19. Health centers, mobile clinics and ambulances are available, and pilgrims must wear face masks and keep apart.

Each pilgrim was given a kit containing sterilized stones with which to perform the Jamarat stoning ritual, plus disinfectant, face masks, a praying mat and the ihram – a seamless white dress to be worn for the Hajj. 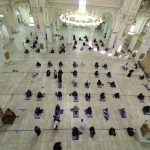 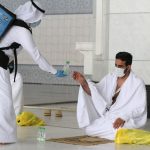 Arab News quoted Saudi public security director Khalid bin Qarar Al-Harbi as saying that “There are no security-related concerns in this pilgrimage, but it is to protect pilgrims from the danger of the pandemic.”

Hajj rituals are performed at different areas around Mecca. On Thursday (30), pilgrims head to Arafat for a sermon – the pinnacle of Hajj, Arab News reported. Afterwards, they move on to the Muzdalifah area for the night, and then they return to the Mina aera for the Jamarat ritual.

About 2.5 million people flocked to Mecca last year for the Hajj, the biggest religious pilgrimage in the world. This year, after months of discussions, the administration decided to only allow Saudi residents – expatriate or native – to do the Hajj. Despite the drastically smaller crowd, authorities are working hard to prevent a coronavirus outbreak during the five-day pilgrimage. Hajj is a once-in-a-lifetime requirement for all healthy and financially able Muslims.

There have been 270,831 Covid-19 cases and 2,789 deaths in Saudi Arabia since the pandemic broke out, as per World Health Organization (WHO) numbers. This is one of the highest rates of any Gulf country.

Hajj will be for Saudi residents only this year
Recovered Covid-19 patients allowed to do the Hajj
Nearly 2.5 million pilgrims go on Hajj
Brazilians go on Hajj, the world’s largest pilgrimage