This Wednesday (29), the Arab Brazilian Chamber of Commerce launched its office in the Egyptian capital city in a ceremony attended by the vice president of Brazil, Hamilton Mourão, and the minister of Trade and Industry of Egypt, Nevin Gamea. 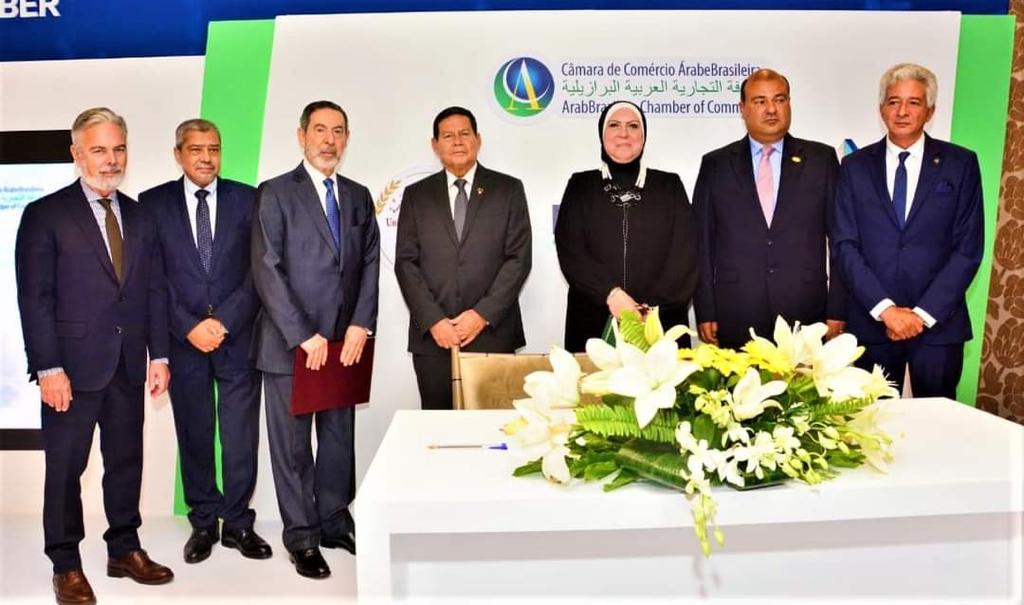 Cairo – The vice president of Brazil, Hamilton Mourão, and the Egyptian minister of Trade and Industry, Nevin Gamea, launched on Wednesday (29) the Arab Brazilian Chamber of Commerce (ABCC) office in Cairo, the institution’s second base in an Arab country. The ABCC already has an office in Dubai, United Arab Emirates.

The launching ceremony was attended by Antonio Patriota, Brazilian ambassador to Cairo; ambassador Kamal Hassan Ali, assistant secretary-general for Economic Affairs of the Arab League; Khaled Hanafy, secretary-general of the Union of Arab Chambers (UAC); Ibrahim Al- Arabi, chairman of the Federation of Egyptian Chambers of Commerce (FEDCOC); and ambassador Osmar Chohfi, president of the ABCC, among other authorities. 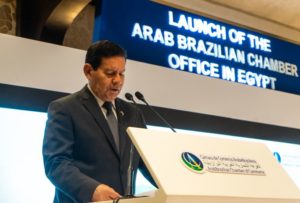 Mourão announced an agreement with Egypt aiming to launch a nonstop flight between Cairo, and São Paulo as Egypt is among Brazil’s main partners, not only in the Arab world but in Africa as well, particularly in the economic field.

Furthermore, he stressed that since the signing of the free trade agreement between Mercosur and Egypt, mutual economic and trade relations have increasingly strengthened and pointed out that the Brazilian National Congress has recently approved a series of tax reforms to draw new foreign investments.

Mourão explained that, during his visit to Egypt, he has seen a great enthusiasm from Egyptian political and business leaders in developing economic ties and stressed the importance of the agreement with FEDCOC to headquarter the ABCC’s office and the consequent strengthening of mutual economic and trade ties.

In turn, minister Nevin Gamea expressed the admiration of her government for the historical relations between the two countries, Brazil being one of Egypt’s major partners in Latin America in the political and economic fields. Gamea also mentioned the key role of the private sector and business organizations in establishing bilateral connections between the two countries in trade, industry and investment.

She stated that the project for Egypt’s new administrative capital, deemed one of the most significant and notable initiatives in recent times by the Egyptian government, is very similar to the creation of Brazil’s new capital Brasília back in 1960. According to Gamea, this is the most important national project created and carried out by president Abdul Fattah Al-Sisi, among countless others that are currently under implementation. 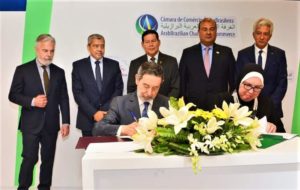 Chohfi and Gamea signing the agreement

Gamea added that Mercosur-Egypt free trade agreement, which came into force in September 2017, contributed to the consolidation of the trade relations between the two countries, especially during the novel coronavirus pandemic. She also pointed out that the second meeting of the Egypt-Mercosur Commission held in mid-September was extremely successful and attended by major officials from Egypt and Mercosur.

The minister highlighted the importance of joint work between the two nations and implementing it in cooperation projects to create jobs and the achievement of urban, industrial, tourist and agricultural goals for the interest of the Egyptian and Brazilian peoples and economies.

Furthermore, Gamea said how glad the Egyptian government and private sector, including FEDCOC, to see opening of ABCC’s office in Cairo. She said the office will play a fundamental role in serving the common interests of Brazilian and Egyptian businesspeople, strengthening trade cooperation and increasing the circulation of goods and services between the regions.

The minister also mentioned the vital role of the office in developing Egypt-Brazil trade, as the Arab country can be a stepping stone for products from Brazil on their way to other African marketsm thus benefiting from Egypt’s free trade agreements with other African countries, including the Common Market for Eastern and Southern Africa (COMESA) and the African Continental Free Trade Zone (AfCFTA), which aim to facilitate trade between countries on the continent.

Room for a higher trade

Khaled Hanafy said the trade volume between Egypt and Brazil is estimated at USD 2.5 billion, but this is far from what the two countries aspire to, adding that a strategic commercial alliance will now be sought. Hanafy added the primary goal of the ABCC is to have Egypt as a link between Brazil and other Arab countries by using Industry 4.0 tools and available technologic resources, pointing out that Egypt is taking major steps to become an even larger economy. 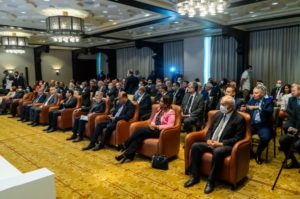 Hanafy believes “there is room to expand and increase exports from Brazil to the Arab League countries, which demosntrates the need for a direct shipping route linking these two parts of the world.” He said that the UAC, in cooperation with its partners in Brazil, mainly the ABCC, will spare no effort in building strategic ties between Arabs and Brazilians.

Ibrahim Al-Arabi, chairman of the FEDCOC, stressed the importance of expanding economic cooperation between Egypt and Brazil, at the bilateral and multilateral levels, within the scope of the Mercosur – Egypt free trade agreement, stating Brazil will continue to be a great partner for Egypt in different productive sectors. He mentioned joint investments exceeded USD 1 billion in cement, bus, trailer, food, agriculture, and electrical power industries.

Moreover, ambassador Osmar Chohfi, president of the ABCC, stated: “Today we celebrate the official launch of our office in Cairo, thus entering into a crucial stage of the ABCC’s internationalization and consolidating our global presence, which is part of our institution’s strategic growth plan.”

Chohfi said that the office would offer more support to Brazilian and Egyptian business people to improve trade, economic and technological cooperation and support initiatives by both countries’ governments, thus strengthening ties for a more significant market growth and development.

He declared Egypt was the first Arab country to establish diplomatic ties with Brazil and have maintained for centuries  healthy world trade relations, particularly with North Africa, Eastern Mediterranean and Sub-Saharan Africa, due to its strategic geographic location. 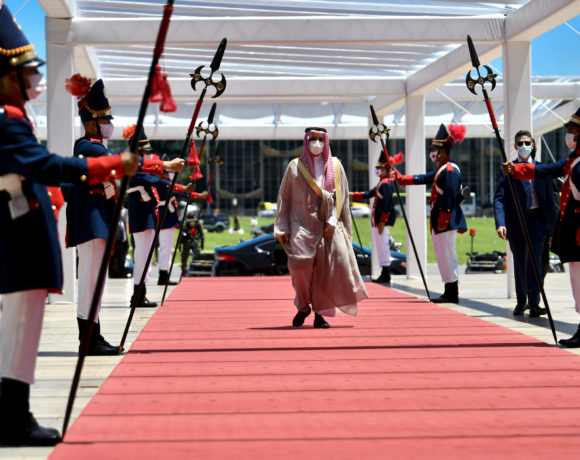 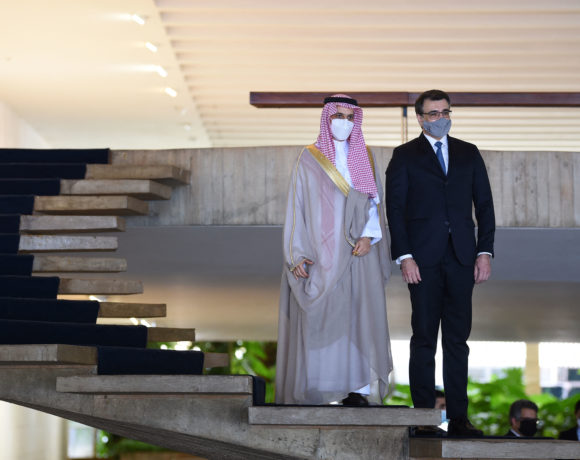 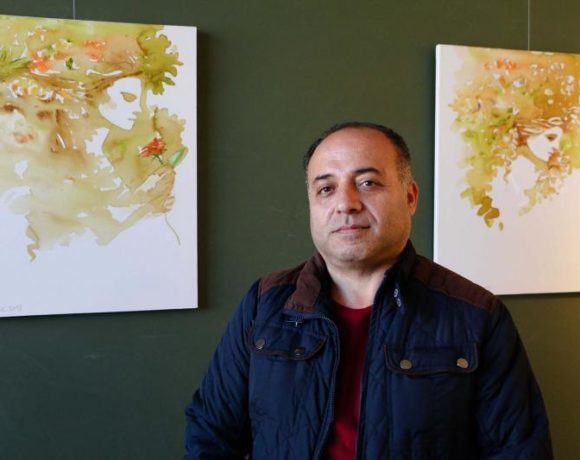 Syrian professor to lecture on Baghdad’s House of Wisdom