In the Brazilian semiarid, there are saltwater-tolerant forage plant species. They are part of the interest of the UAE’s International Center for Biosaline Agriculture (ICBA) in the agreement signed with Embrapa. On the other hand, Brazilians aim to know more about genetic resources and technologies developed by the Arabs. 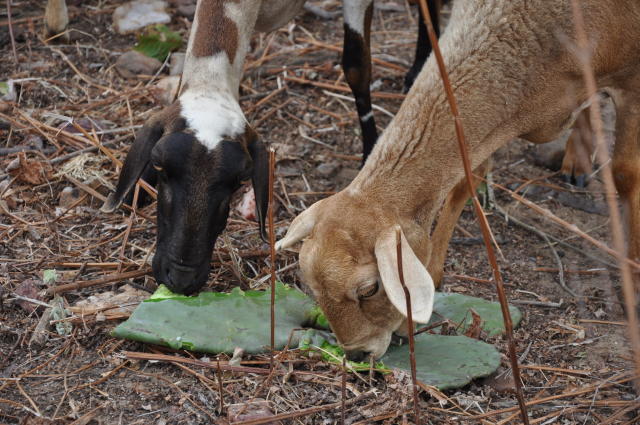 In a phone interview with ANBA, Embrapa president Celso Moretti explained that ICBA is a reference in studies of environments with extremely low water availability. At Emprapa, the topic is headed by Embrapa Semi-Arid. “We have a portfolio for coping with the droughts. In the past, it was said that you should fight the droughts, but now we understand that you must cope with it and have smart strategies,” Moretti stressed. 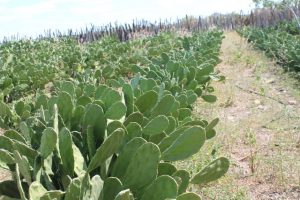 The forage palm is a saltwater-tolerant plant species from Brazil

One strategy developed in Brazil’s Caatinga is using subsoil salt-rich waters. In the region, the rains are concentrated in 3 to 4 months a year. And while the average rainfall is 800 millimeters, the evaporation is 2,500 ml. “It’s a challenge. The farmers often dig a well in the terrain to search for subsoil water. But the geological formation makes the irrigation potential very low because it is rich in salt. The fact is that it is often the only option the farmer has,” explained Diana Signor Deon, Embrapa Semiarid researcher and chairman of the research portfolio Coping with Droughts in the Semiarid.

This led to the creation of the federal government’s Programa Água Doce (the Fresh Water Program) over two decades ago, which has desalinators installed in rural communities to produce water for human consumption. But Embrapa decided to study how to use the refuse of this desalination. “Its refuse was the main challenge because it accumulated even more salt. The solution was using this refuse in tank culture of tilapia, creating a source of high-quality protein for human consumption. The water that comes out of the tank is full organic matter and irrigates the plants that feed the animals,” Moretti explained about the program that ends up growing forage plants. 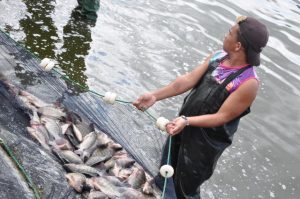 Farmers use the desalination refuse water in tilapia culture

These saltwater-tolerant plants are part of the genetic resources to be shared with the Arabs. “The ICBA is interested in getting to know these species. These are Brazilian native plants, and Embrapa has worked in the management of the saltwater-tolerant forage plants such as the saltbush and forage palm,” Moretti said.

The importance of producing forage plants has made possible germplasm banks such as the one devoted to the palm genetic resources at the Agronomic Institute of Pernambuco (IPA). “Within the cooperation agreement we signed, we have a wide scope to work on management practices, too,” Deon said.

Embrapa expects to raise funds in the future to implement the partnership. “At first, we will develop projects together, while they finance their part and we finance ours. Later on, we plan on seeking out financing from the Brazilian government, the UAE or other sources,” Moretti explained.

The memorandum is just part of the proposals that Embrapa made to the UAE government during a mission that took place last January. Moretti explains that a broader proposal was forwarded in March to the UAE Food Security minister Mariam bint Mohammed Saeed Hareb Almheiri. “We believe that we could advance it even more. The partnership with ICBA is just part of what we intend to do in this strategic plan. Our goal is supporting the UAE in establishing their National Agricultural Research System. Embrapa did this in Brazil in the past, and we believe we can help them to the same,” the president pointed out.

Another project aims at supporting the development of an agricultural zoning platform in the UAE. “We know that the country has a caprine herd of around 5 million head. So, we can study their territory to identify opportunities for them to optimize this production,” Moretti explained.

There is also an opportunity in projects in Africa. “The African continent has 60% of agricultural land. The African savannah is very similar to Brazilian cerrado. Since Brazil is the world’s only country to have mastered the tropical agriculture, Embrapa could – together with the UAE and a third player (an African country) – develop cooperation projects. The UAE would be interested in having a place to produce food and provide its population with food security. It’s a three-fold win-win,” Moretti stressed.

This is where the Embrapa president says that Brazilian companies would enter. “I believe that we could take agricultural technology to the tropical world, particularly African and Southeast Asia, together with Brazilian private companies, that have technology in animal and plant genetics, and machinery,” he said. Moretti argued that the measure was taken in other contexts in Brazil and was successful for corporations from countries such as the United States, which brough companies through its state agency USAID, and Japan, with JICA.

The agreement also provides for the interchange of researchers, which will take a bit longer to be implemented. “When the pandemic is over, we want to welcome Arab technicians and take Brazilian professionals there, too,” Moretti pointed out. The pandemic has also put off the plans to open an Embrapa office in Abu Dhabi, UAE’s capital, which has not a date to occur.

Now, Embrapa expects to expand the partnerships with other Gulf countries, including Qatar. “We are very excited with potential results of this agreement with ICBA, and it can lead to other projects with the country. We hope to take it to other countries of the Arab League. I was in Qatar last year and its government is interested in working more closely with Embrapa. So, we have many interesting possibilities,” Embrapa president finished. 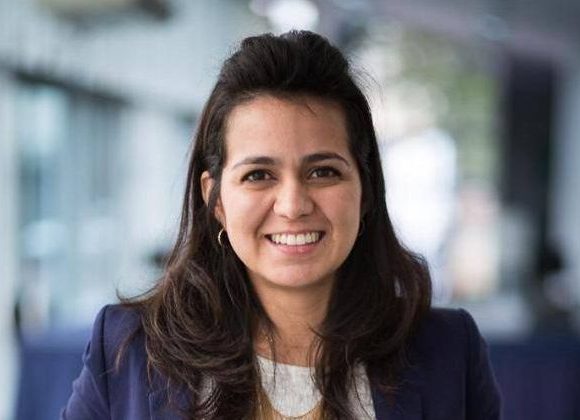