The recipient of an honor during the São Paulo International Film Festival, the filmmaker told ANBA about his latest movie, his creative process, his beginnings, and the Palestinian cause. 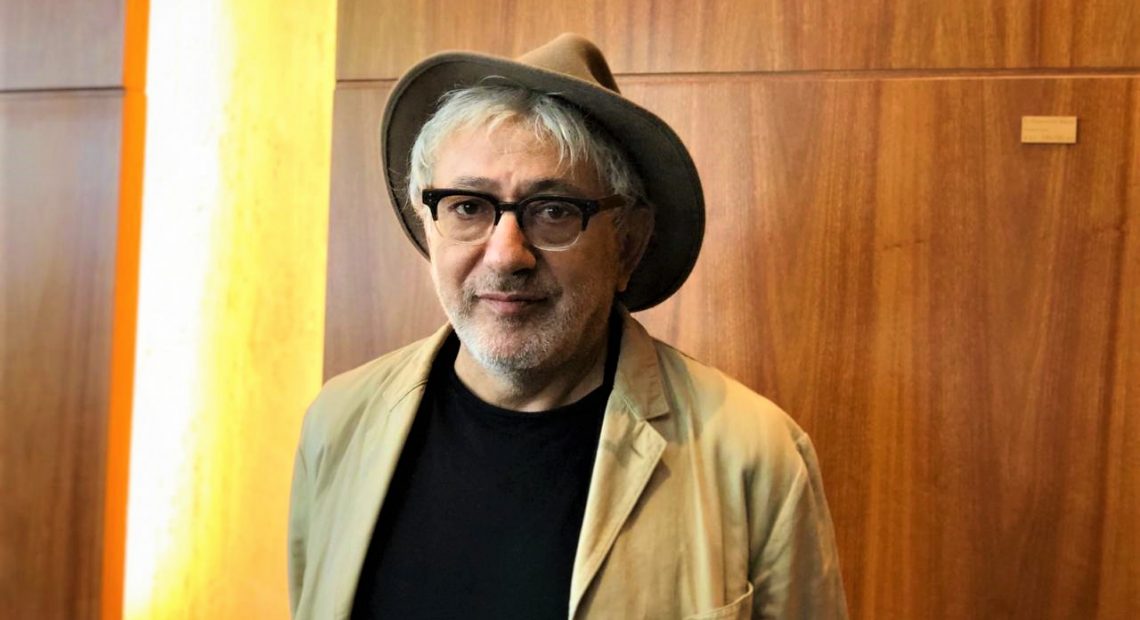 São Paulo – Filmmaker Elia Suleiman of Palestine plays some version of himself in all his movies. Currently in Brazil for the second time – he’d been to Rio de Janeiro in 2003 -, Suleiman accepted the Humanity Award at the São Paulo International Film Festival. Besides directing and acting, he handles screenwriting and production for his films. He spoke with ANBA about “It Must Be Heaven” – his latest offering and a possible nominee for Best Foreign Language Film in the Academy Awards –, his early career, his creative process, the Palestinian cause and the politics that permeate his work.

“It Must Be Heaven” is a comical saga featuring Suleiman as a Palestinian who flees his land, only to find that Palestine haunts him wherever he goes, from Paris to New York.

The film will get distributed in Brazil after the festival, but the release date is still unknown. Mexican actor Gael García Bernal, who’s friends with Suleiman, is in the cast. Suleiman’s “Divine Intervention” and “Chronicle of a Disappearance” – his first movie – were also shown in the festival. Check out the interview below.

ANBA – How did you first start working in cinema?

Elia Suleiman – I got in through the back door. I didn’t know much at all. I sensed that I could do it but had many misgivings. I had no previous involvement with cinema. It was like doing homework. I didn’t understand what [the movies meant]. As a child I’d only watch the mediocre movies, the semi-commercial movies.

I guess that early on I was driven to challenge these distorted representations of what it means to be Palestinian, so I was really interested in creating an alternative narrative. I’d watch films that portrayed Palestine in such a stereotypical way, even when [their authors] were sympathetic to the cause, and those who were deeply sympathetic would be particularly racist.

And then I realized I didn’t have the critical vocabulary to make this critique, so I started reading filmmakers’ books about their own work, and I identified with what they were saying. I’d write down the names of filmmakers whose critical views I liked, like [Luis] Buñuel, for instance. And then I spent a year watching movies, two or three a day, and found out about filmmakers who appealed to my way of seeing things. I began to envision a potential in the possibilities that I had.

Yes, 1980s New York. My actual career began in the 1990s. I lived in Nazareth until my teens and left in 1981, 1982. I taught myself in New York; I had no formal training in filmmaking. I live in Paris now, but I never parted ways with Palestine. I go back whenever I can. Not so much now, because my parents have passed, but I still have relations and friends in Nazareth. It’s a small town.

My relationship and connection are no longer the same since my parents died. I don’t feel I have to go, but I keep going. For this last film we filmed in Nazareth, so I got to spend a lot of time there.

I play myself in all my films. It just happened, out of intuition, since my very first short film in New York. Maybe it’s because of the semibiographical moments I try to capture onscreen. I made this decision and I ended up doing it myself. It was part of the process, of the way you feel when you compose images. It’s more of an intuitive thing.

And in this movie you deal with the Palestinian issue in Nazareth, Paris and New York as a global issue, is that correct?

Cinema brings us all closer. It’s universal, it’s not a local language. I guess my early films were universal, but from a perspective of having been filmed in Palestine. It was more about dealing with Palestine as a cosmos at a universal level.

This latest one is the opposite. It’s the global reflecting the local, because I think what’s happening now is we have a similar situation wherever we are. It’s not just one place that’s under occupation. There are similarities in the violence and tension everywhere, including in your country. Globalization created this violence that serves the purposes of the few. It’s very similar everywhere we go.

These unannounced dictatorships that we’re witnessing around the world, if you look at the world today, you read the papers and there’s all this protesting going on, I guess the world is in a state of despair. Look at what’s happening in Chile, Lebanon, Algeria, Iraq or Hong Kong. The people are in the streets for a reason. I guess that’s what the film tries to discuss. Not by being confrontational, but by using humor and the burlesque.

But I also wanted to deal with the individual rather than the collectivity. With our own personal fragility and alienation in the face of what’s going on around us. Anyone can talk about protests and demonstrations, but we’re having trouble talking about our innermost fears when we wake up in the morning and realize the world is on an unknown and dangerous path. We’re experiencing this fear and this loneliness, yet we’re failing to talk about it in an intimate way. 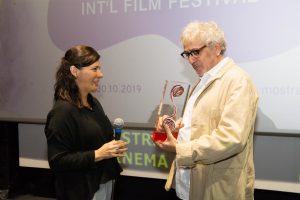 And what was the audience reception like here in São Paulo?

The movie got good reactions. We had a debate and a Q&A session. People came up to me to tell me how much they liked the film. And it’s rewarding to see that your movie – its language and its message – travels to different cultures and viewers identify with what it’s trying to say.

Do you consider yourself more of a director or an actor?

I’m more of a director than an actor. The acting just comes with the package. If I were an actor, I’d be in movies other than my own.

Are there many autobiographical elements in your films?

There are autobiographical elements in all my films. I think 99% of what ends up on the screen is something that has some part of my life as a backdrop. But having said that, it’s not a replication of what I experienced. That’s not what it is. It’s more like – you need to be alert, and you see things happening, and if the desire is there to portray it in a cinematic image, then it becomes an image. But I’m not reenacting my life; I’m basically soaking up the realities around me and they end up on the screen. I can say that much of what you see in my movies comes from actual moments in my life, and the work is about making it aesthetically interesting for the cinema.

What’s your creative process like? Do you begin with the writing?

Yes, I begin with the writing, by making small day-to-day notes. It’s basically an accumulation of endless notes I make on things I see, ideas, dreams, images I see. It takes years before it takes shape and you realize you have something to say. That’s when I start building on those notes and connecting them.

You get a feel for what the film can become or where it’s headed, but you can’t tell early on and you need to let it happen. You can’t control it, because if you try, you won’t get the result you expect.

If you go with it in a meditation-like process, there’s a place deep, deep inside of you that will take you to a cosmos where you become many. When you get to this point, you must have faith that what you’re saying is something that will communicate and identify with the viewer, or the reader.

If you don’t make that leap, which has risks to it, you’ll become closed off in yourself, and in order to open up you must embrace risk. I think this inner trip is important, it’s a meditative state that brings you closer to the viewer.

The problem about containing everything with a sense of authority is that the viewer will sense it. Because the viewer can tell that you’re pushing your point of view, and the work comes out more linear. And it’s not as pleasant to them to just get it from you in a kind of impositional way, instead of giving the viewer a chance to share what you’re trying to portray.

Do you see any similarities between Arab and Latin American cinema?

I must be honest: I don’t know much about Arab cinema. I’ve never been much of a fan of Arab cinema. I’ve become more interested in it lately, with the new generation, which is much more cinematic, more attuned to the universal language of film.

Although Arab cinema wasn’t an influence, I think movie genres got switched in the last decades. It can be argued that the neorealist genre has been embraced by Brazilian cinema, by Egyptian cinema, and yet it originated in Italy.

What’s similar is the topics. Latin American cinema is close in what it tries to portray, especially because these two worlds (Arab and Latin American countries) were colonized in some way, so the experience of colonization creates identification. 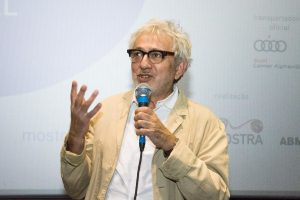 Suleiman in a conversation with the audience in São Paulo

How about Palestinian cinema?

I find it difficult to compare Palestinian cinema, because Latin American cinema has this whole cinematic dictionary, and Palestinian filmmaking attempts are too recent.

But again, I’d say global cinema connects when it deals with certain subjects. What I see is young people leading the cinematic expedition in Palestine and the world. Everywhere I go, I see the effervescence of young people trying to tell stories in a different way, with an alternative narrative. This is very encouraging, even though cinema as a whole isn’t at its finest hour.

Were your parents also artists?

No. My mother was a teacher and my father was a kind of mechanic. But I guess I was influenced by my family, for example, in the humor that’s in my films. We always had a lot of humor at home. And my brothers were intellectuals; they brought me musical influences. Everything’s not always black and white.

What do you think is the biggest issue that needs addressing in Palestine today?

In one word: justice. Which they will not get. And I think that’s even harder to get in the world today. You know, a while ago, the wrongdoers, in Israel or anywhere else, the fascists, they used to have to hide their fascist ways. Not anymore. Now they can come out and speak openly anywhere. Look at your country, that’s the worse! Look at Trump, at Eastern Europe, look at all these places, the Middle East, Turkey… It’s out in the open. They no longer feel intimidated. I think the East and totalitarian regimes around the world no longer have reason to be intimidated with all their criminal and evil doings.

And through your movies do you seek this justice?

I’m asking questions; I’m not preaching justice. I think that when you have the pleasure to view an image, whatever you associate with it can lead you to question a few things around you. Cinema doesn’t solve any problems. It doesn’t offer solutions, it has no influence whatsoever. Perhaps the culmination of art might one day counteract the damage that’s done, but cinema alone can’t do it.

Watch the trailer for the film. 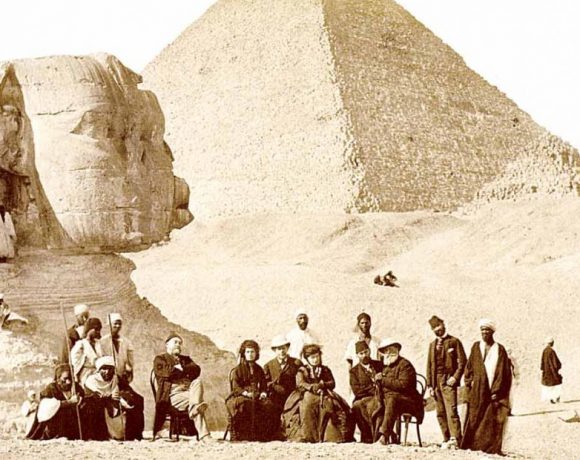 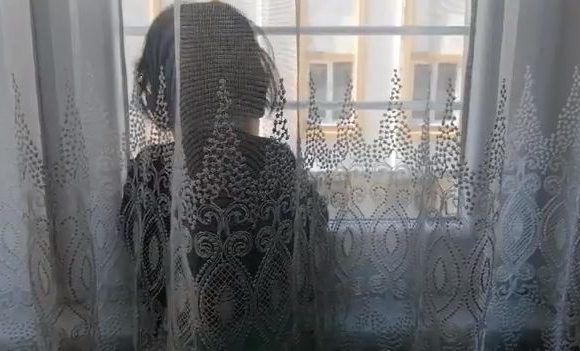