Brazilian singer-songwriter talked to ANBA about his Lebanese father, the future of the band Tribo de Jah and his new group, Fauzi Beydoun & The Soul Vibe, which will soon release their second album. 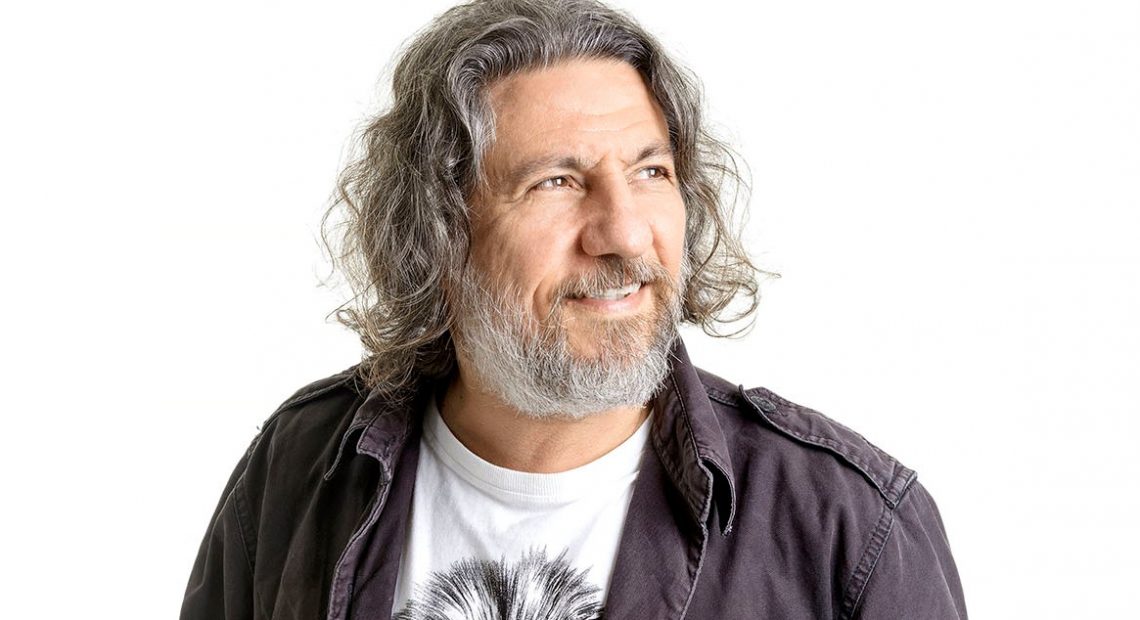 São Paulo – Singer-songwriter Fauzi Beydoun from the reggae group Tribo de Jah is about to launch his second album of his new project Fauzi Beydoun & The Soul Vibe. Now 60 years old, the son of a Lebanese father with a Brazilian mother of Italian descent born in Assis, São Paulo talked to ANBA about his new work, his relationship with his father, the three years he spent in a Lebanese community in Ivory Coast and future projects.

Fauzi’s father Mohamed Ali Abdul Hamid Beydoun was a Muslim from South Lebanon and arrived in Brazil in the late 40s. Speaking no Portuguese, he went to the countryside of São Paulo to work as a traveling salesman. There he met Fauzi’s mother Emigdia Juliana Menegon Beydoun, a daughter of Italian parents. Their daughter was born in the city of Iepê, Fauzi was born in Assis, some years later. When he was two, his father left Brazil because of financial problems. Emigdia didn’t want to go with him because of their small children. Mohamed passed by several countries and eventually settled in the Ivory Coast. 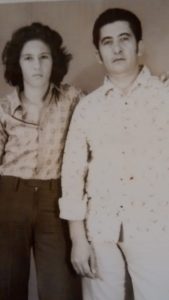 Fauzi (L) with his father Mohamed in Ivory Coast in 1974

“When I was 13, my dad sent us letters in Arabic, which had to be translated by a Lebanese friend of my mother. In on of them, he invited me to live with him in the African country. I wanted to meet my father. I went to Abidjan, then Ivory Coast’s capital city [and theme of a famous song by Tribo de Jah, ‘Abidjan, Abidjan’], where I lived for three years with my dad in the 1970s,” said Fauzi. There he learned French, the official language of the country which was a France colony until 1960. He used to talk with his father in Portuguese and said there was a large Lebanese community there, of around 35,000 people. He also learned a bit of Arabic. At Tribo de Jah, Fauzi sings in Portuguese, French, Spanish and English.

“When I lived in Africa, there was a large, very tight Lebanese community. Despite the French school, it was a very deep immersion in the Lebanese culture, cuisine, customs, tradition. This left a very deep impression on me that I keep until today. It moved me deeply, I really enjoyed because it was very remarkable, a Lebanon in Africa. The community was always together there,” he said.

In the late 1980s, Mohamed moved back to South Lebanon, to the city of Tyre, where he started a new family. Fauzi has three Lebanese half-brothers and one half-sister. Around ten years ago, his father came to Brazil to spend a month. It was the last time they saw each other. “When he came to Brazil, we talked a lot, went fishing, back when I lived in Atibaia. We hanged out, went to restaurants. I’m proud of my background,” said Fauzi.

“I think I inherited my father’s sense of adventure, his nomadic nature. We go where the wind blows. Other things we have in common are the temper, political affinities and worldviews, the way we see things, family,” he said.

Mohamed Beydoun died two years ago in Lebanon. “I couldn’t go to my father’s funeral because of contractual obligations with Tribo [de Jah], I had to carry out the contract. But I plan visiting Lebanon soon, that is my wish. He [my father] really wanted I went there. I couldn’t, but I’ll still go someday,” Fauzi said, adding that he wanted to go with his family to visit his uncles and half-brother that still live there, as well as other relatives.

The artist is not Muslim. “I was raised a Christian by my mother and see myself as a self-taught Catholic of several religions,” he said. Now, Fauzi lives in São Luís, Maranhão, having lived for several years in São Paulo when Tribo de Jah started going big.

Now 60, Fauzi said he is at his creative peak. Two years ago, he started a new band, Fauzi Beydoun & The Soul Vibe, a fusion of world music, blues, reggae, and bossa nova. “It’s a different sound from Tribo [de Jah]’s. I have worked as a songwriter for over 40 years and feel very musically productive, and theses styles don’t fit into Tribo, which has a more roots reggae sound from Maranhão,” he explained.

The band Tribo de Jah has been around for 34 years

Fauzi said the band’s second album is being produced. “Later this year or the next, we’ll release the second album, which I hope it is my ultimate music product and expect to leave it as my legacy. It’s a work for the next generations,” he said.

“Not to brag, it’s a high-quality work. I really loved all that counterculture music, Janis Joplin, Eric Clapton, Jimi Hendry, before stumbling on reggae, and I liked Brazilian music, progressive rock, Frank Zappa, alternative stuff. From all this musical learning of a lifetime, I’m trying to synthetize what I believe it’s a palatable, good-listening music. Before playing reggae, I used to play blues, but then Tribo made me busy and I hadn’t the time to give vent to other styles, so now I tried to extract the best from all I could learn and the result is the work with Soul Vibe,” Fauzi explained.

The “Soul in Love” music video was released in August 28.

(The story continues after the video)

With Tribo de Jah, it’s a different story, said Fauzi. “The band established with a roots-reggae reference. It’s a band that represents the Maranhão style of enjoying reggae and imprinted this identity and I think that’s what made Tribo resilient enough to stay strong after thirty years even outside the mainstream media. We became a reference of roots reggae. When people talk about Brazilian reggae, they think on Tribo de Jah,” he said.

Fauzi believes that Jamaican reggae lost its way, it’s not the same from the time of Bob Marley. Jamaican reggae lost their sound in the 1970s. Tribo is much more purist than current Jamaican bands. If you go there, you’ll find reggaeton, a much more electronic style that sings about drugs, sex and swag; it changed completely, some few groups still preserve the reggae tradition. Reggae is actually being better preserved by bands outside [Jamaica], in the United States, United Kingdom, the Virgin Islands. If you listen to Tribo [de Jah]’s last albums you’ll notice it’s a much more organic, roots sound, and we’re very respected in festivals abroad,” he said. 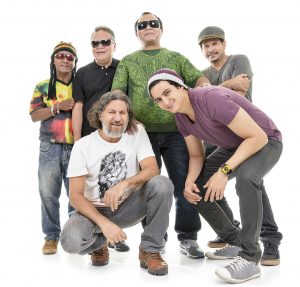 Current formation of the band with Luan Richard and Pedro Beydoun

The reggae band Tribo de Jah has been around for 34 years, and its current formation is almost the same from the beginning. “Only the keyboardist Frazão retired and Luan Richard assumed, and the first vocalist left seven years ago, now my son [Pedro Beydoun] sings on his place,” he said. Aquiles Rabelo (bass), João Rodrigues (drums) and Neto Enes (guitar) are from the original formation. The three of them are visually impaired and they met at Escola de Cegos do Maranhão [Maranhão School for the Blind], where the band began.

“Our band now has just old, family men. But when we were young, we had a revolutionary spirit that the band carries until now. Our song themes were always against the system. We criticize corruption, impunity, globalization, the savage capitalism, the financial casino that is the stock market. I’m no communist, but I am critical of social inequality. All the money that is embezzled could be used to make a fairer country, but we don’t have people capable to govern for the benefit of the majority,” he said.

Having released nineteen albums, Fauzi said Tribo de Jah remains critical, but has also a spiritualist tone. “We have songs such as ‘Farsa da Democracia,’ ‘Traidores da Pátria’ (both from the album ‘Confissões de um Velho Guerreiro’), about the dictatorship of the money. But we also have songs with a more spiritual content, where we talk about God without a specific religion, and we have a host of loyal fans, it’s very rewarding to have such a feedback,” he said.

Tribo de Jah’s next project is recording an acoustic DVD. “I believe it’s something to crow the band, a very neat, careful acoustic work, very roots, very organic. The project has already been approved; we just have to raise funds, but it’ll probably happen in the first half of next year,” said Fauzi. 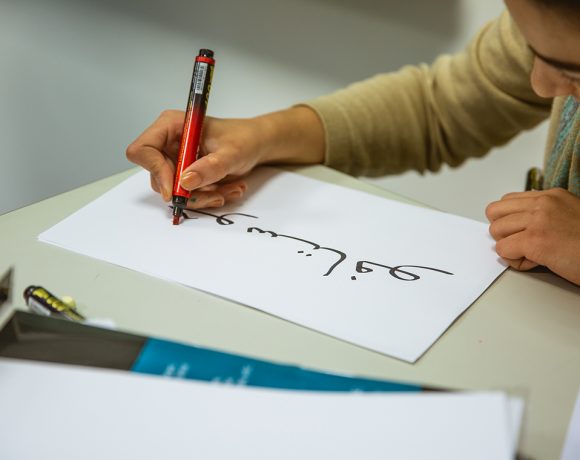 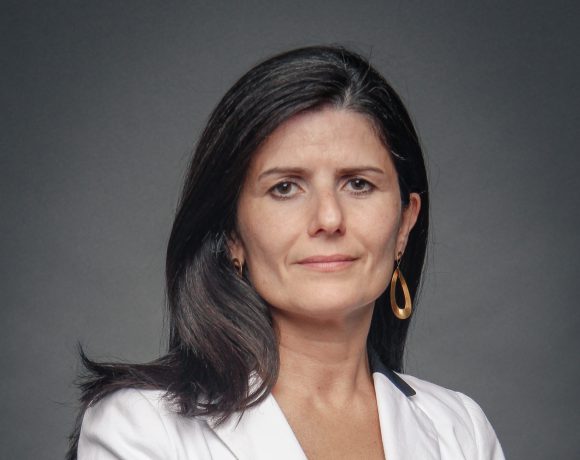