New regions of prominence on the national stage share the cultivation around and deep into the woods. This experience takes place where the culture seems unusual, such as Rondônia and Ceará.

Belo Horizonte – Brazilian coffee production is known for its huge volume. The National Company of Supply (Conab) foresees 49 million bags of coffee only this year. But these priorities have changed and, instead of size, quality has moved up on list. In this pursuit, growers in unusual regions share something: the cultivation with agroforestry techniques.

That’s how growers in Ceará, a state that is better known for its beaches than crops, restarted their history with the bean. There, plants grow under the shadows of the forest since the early 19th century. “Coffee arrived in Ceará before going to the Southeast,” says Francisco Uchôa (pictured above) with Sítio Águas Finas in the region of Maciço do Baturité in a interview with ANBA during the International Coffee Week (ICW).

In the state where this crop was implanted as soon as it arrived in Brazil, coffee went through the last century to its own devices, growing at the Atlantic Forest, but four years ago the Coffee Growers Association of Serra do Baturité (Afloracafé) was created. “We met in 2016, here at the show, and founded the association as soon as we went back. Our goal is bringing technologies to our region, which has a very low productivity. We have a very high quality at the tree, but we struggle with processing and storage,” says Frederico Yan, who cultivates in his Sítio Bom Princípio farm and is Afloracafé president.

Although the solution was modernizing processes with training, new varieties, irrigation and nutrition, the decision was respecting ancestral techniques. “We’re planting as it used to be done, respecting nature, keeping the trees and the shadow, since this is what ensures its quality. Our cost is very high because we don’t want to put a tractor there and then plant. What’s our goal? Produce with minimum environmental impact,” Yan explained.

He believes that the initiative is also an opportunity to develop the region’s economy. “Our intention is producing good coffee and get an economic return to encourage other growers to not abandon the crop. Most of them are leaving for fruit crops and stripping out the coffee that came back in the 1900s,” he emphasized.

Many native trees with up to 1.5 meter across and 20 meters high offer the coffee shadow and organic matter nutrition. They’re cedars, robles, fig and inga trees. “The inga’s pollen attracts a wasp that predates on the coffee borer beetle, one of the crop’s main pests,” said Uchôa, one of the 16 member farmers.

(The story continues after the photo gallery) 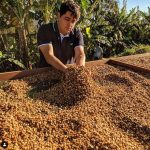 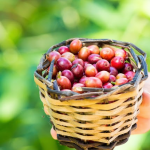 To keep Sítio Águas Finas sustainable, Uchôa invested in agritourism with a lodge and treks for the adventurer ones. “But I always say that a 90-point coffee is our focus. We have multiple flowerages and, as the fruits ripen, we selectively harvest them,” he says. The 90-point evaluation that Uchôa refers to is made by professional tasters and coffees with a rate over 80 points are considered special.

“We are managing to produce good coffees. As early as 2016, most of those who were at least a little bit careful were classified as special,” Yan explained. Most properties have 15-25 hectares and want coffee, which is organic for the most part, reaching the market directly. The work is well on track, all the producers have their own brand of roasted bean.

In another Brazilian biome, native trees also have their own space. In a region close to the municipality of Cacoal in the middle of the Amazon forest, the Paiter Suruí native people grown a canephora coffee, commonly known as robusta coffee. The crop was taken to the Terra Indígena Sete de Setembro during an invasion. “The large majority of the coffee was left in the land after the disintrusion [removal of invaders] in the 80s,” explained National Indian Foundation (Funai) Cacoal regional coordinator Paulo Ricardo Souza Prado.

One hundred forty families live there in 27 villages. One of the 2,000 Indians is Wilson Nakodah Suruí, who had his coffee among the species’ top five at an award given by the ICW, the Coffee of The Year 2019. “I though it was great! I’d cheer for anyone of my people to win, even if it’s not me!” celebrated Nakodah.

His persistence made him the first Indian to reach the shortlist of the award. In 1982, Nakodah started tending the coffee and planting more trees, but the crop devaluation discouraged him. “The price was very low. The bag was being sold for BRL 15-20 (USD 4-5), so I stopped planting for a while,” he recalled. In 2013, when he discovered local varieties, the so-called “clonal coffee,” he tried planting again. “We learned about clonal coffee online,” explained he, who also produces peach palms, nuts and bananas.

“Around the crops, there are areas of capoeira and forest. It’s a sustainable production. When the focus became coffee, deforestation declined. This year, which saw a coffee recovery, deforestation was almost zero,” Funai coordination stressed.

Some crops are consortiated with nut trees, bananas, cupuaçu and cacao, and even hardwood. The Suruí people produced around 1,300 bags of coffee in 2019. “All the coffee produced is high-quality. That’s the vision. The Suruí people signed a contract with 3 Corações [brand], which funded a African raised bed and tools for securing the quality after the harvest as well as assuring a more profitable price than the market price,” said the coordinator. 3 Corações is Brazil’s roasted and ground coffee leading company, and the proposal to buy Indian’s beans include creating a brand exclusive for them. 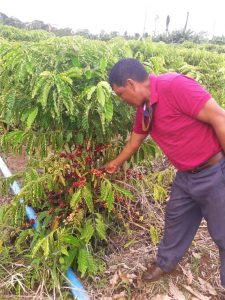 Nakodah believed that the beds improved the coffee quality. The fruit harvested was washed, fermented for 20 days and then dried at the beds paid by the company. “The three Rondonia coffees that reached the award shortlist are very different. They are Amazon fermented robusta coffees. The Suruí coffee is a Amazon delicacy, is very fruity, have 88 points,” says Janderson Dalazen with Brazilian Agricultural Research Company (Embrapa) in Rondônia and one of the only Brazilian tasters who specialize in canephora coffee who call themselves Q-Robusta Grader.

From nearby, in the municipality of Alto Alegre dos Parecis, came another finalist coffee, this one by Nilton marques de Lima. He started producing high-quality beans in 2016 and, just like the Indians, don’t like to apply chemical products. “We plant until the coffee is four years old, with just natural biologic products to fight off the borer beetle,” he explained. With the organic material he collects in the woods of the estate, he grows the Beauveria fungus, a “remedy” against the coffee pests.

The fresh impetus for the activity in the state is motivated by the Rondonia Coffee Growing Project, which was created by organizations such as the Brazilian Micro and Small Business Support Service (SEBRAE) and Embrapa together with the government of the state. The initiative takes producers to coffee cuppings, training and presents new technologies such as a box for controlled bean fermentation. “This work has encouraged many producers that grow high-quality coffee. Rondônia is going through a transformation in how they see coffee, from a commodity to a special coffee,” Dalazen finished.

Far away, at Brazil’s third highest mountain – Pico da Bandeira, Minas Gerais – Willians Valério and his family decided to grow coffee beans. Twenty-two years ago, at 1,500-meter altitude, they founded Sítio Recanto dos Tucanos, but it wasn’t until four years ago that they embraced so-called “syntropic farming.” “I found out that the guy who does this type of farming has one of the best cocoas in the world. He’s a Swiss man who lives and farms in Bahia. And he puts out three times more than the regular [cocoa farmer],” explains Valério, who’s since taken courses with people associated with the man who introduced the system. 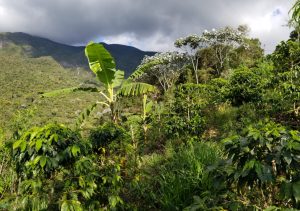 But what is syntropic farming? “The difference is in crop management. We’ll plant an entire forest. Every stage. Some plants will bloom quicker and bring the others along, and we replicate that in farming. We’ll usually plant beans, which you harvest in 60 days, then corn, then bananas, then coffee. We design the system as we go,” the farmer describes.

Valério farms coffee alongside bananas, guava, peach, pumpkin and vegetables. “The peach’s leaves, for instance, will fall off completely during winter, so the coffee gets sunlight. And then there’s the persimmon, whose natural pruning lets in 100% of the light,” explains Valério.

His nature-driven approach won him the Best Arabica title at the 2019 Coffee of the Year contest. Attention to detail is painstaking in growing the fruit – a red and yellow Catuaí hybrid picked one by one when ripe, and then washed and hang-dried for 25 days.

The farming is done by Valério, local workers, volunteers and a partner. “This year we got 15 bags of coffee and we’re still harvesting. There’s plenty of new ground that’ll become productive next year. Our entire farm is syntropic. All we grow is agroforest systems,” he ensures.

The system is complemented by native plants including assa-peixe, umbaúba, canela, capoeira-branca and picão. “These are native plants that become friends, like the jaboticaba. Not to mention the ones we bring from elsewhere, like peach and olive,” says Valério, who’s working on his own course to teach the technique. 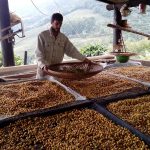 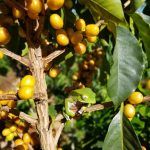 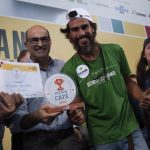 But before the triumph there were moments of desperation. Last September, some of the property burned off in the fire that hit Caparaó Park. “We got there and I saw that fire, it was something I’d never seen in my life. We went up and it was worse than we imagined. There were people about to die, people running away. We managed to contain the fire at the river,” he recalls.

At Sítio Recanto dos Tucanos, the crop management whereby organic material is kept only on the ground meant the fire kept low. “Within the Park, where there was no management and the organic material was high, there was no way to contain it. We tried in some places and almost got killed. It was quite critical. Thank God we overcame it and showed that fire-free, poison-free farming can be much more beneficial for everyone. Plus you get better quality. Here’s hoping people will do fire-free, poison-free farming. Syntropic farming!,” says the coffee grower. 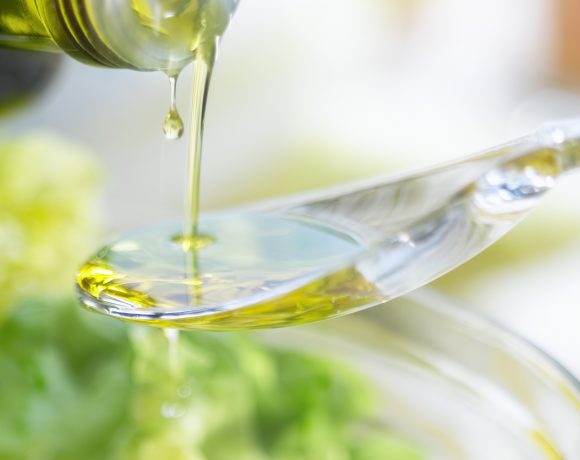 Through a part of Syria that saw no war, but many losses