Brazilian research to be awarded in Qatar

Group of Study and Research on Development and Psychosocial Intervention (GEPDIP) at USP Ribeirão Preto will be awarded at the 19th World Congress of Criminology to take place in Doha later this month. The study is on the use of psychoactive substance by teenagers. 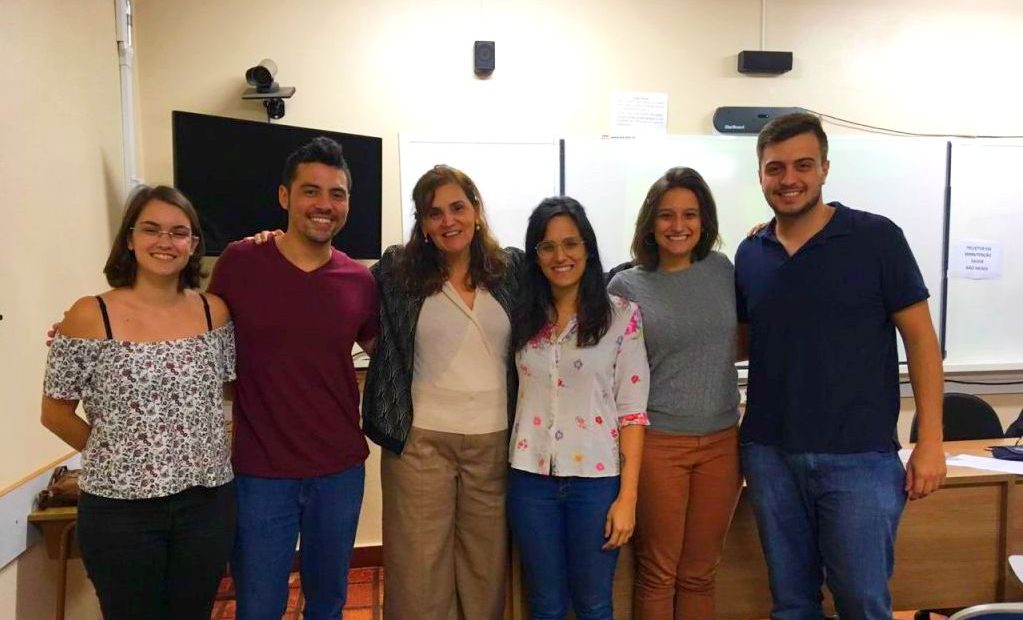 São Paulo – A Brazilian research on teenage consumption of psychoactive substances will be awarded in the 19th World Congress of Criminology (Intercrim) to run from October 27 to 31 in Doha, Qatar. Two of the authors of the study, André Vilela Komatsu and Marina Rezende Bazon, will be at the congress to receive the award and present the paper in the 27th. (Pictured above, some of the researches and colleagues.)

The study is one of the ten researchers awarded by the United Nations Office on Drugs and Crimes (UNODC) and the International Society of Criminology (ISC), which organize the congress together with the College of Law at Qatar University. The choice was based on their theoretical and methodological quality, as well as the contribution to the theme.

The Brazilian research to be awarded is called “Substance use and involvement in situations of violence: A typological study in Brazilian sample.” It identified substance use patterns in 13- to 15-year-old teenagers. Patterns found include frequency of use and the combination of the consumption of different substances associated to the case severity level.

The basis of the research was a subsample of a survey by Brazilian Institute of Geography and Statistics (IBGE) and Ministries of Health of Education with information on 6,702 middle-schoolers from Brazil’s private and public schools. The researchers analyzed and discussed the data.

Out of those that answered the survey, they identified a group representing 5% of the total that consumes alcohol, tobacco, marijuana and crack in association, frequently and significantly. Komatsu said that these teenagers have a higher risk of involvement in situations of physical violence and sexual abuse, this last one usually in the role of the victim. This group also shows physical and mental health problems, such as a discomfort with their own bodies.

Psychologist André Vilela Komatsu says that, based on the discussions during the research, there are different user profiles, so a single public policy cannot serve all identified patterns. It has to be adjusted for a wider reach and increased efficiency, he says. Komatsu also believes the school may be an environment to work through and raise awareness on these issues and suggest actions such as listening.

The Brazilian’s work was done as part of the Group of Study and Research on Development and Psychosocial Intervention (GEPDIP) at University of São Paulo (USP) in Ribeirão Preto. They submitted the paper to the congress and were chosen among applications from several countries. Other awarded papers are from China, South Africa, United States, Italy, Poland, India, Australia, Macedonia, and Portugal.

Participants at the GEPDIP research also included Rafaelle Carolynne Santos Costa and Lais Sette Galinari, master students in Psychology at the Faculty of Philosophy, Sciences and Letters at Ribeirão Preto (FFLRP) of USP, as well as Renato Carpio de la Torre, professor at National University of Saint Augustine in Peru. Komatsu is a PhD researcher at the Nucleus of Violence Studies (NEV) at USP, while Marina is a professor at the Psychology Department at FFCLRP and a coordinator at GEPDIP.

Komatsu and Marina will join the discussion at the congress and present other researches besides the prided one. Komatsu will talk on how teenagers perceive the legitimacy of law through the contact with authority figures, and Marina will address teenagers in violent crimes and their traits.