The facility will be launched by state governor João Doria during a business mission which he will lead to the United Arab Emirates in February 2020. In the second half, he intends to go to Qatar. 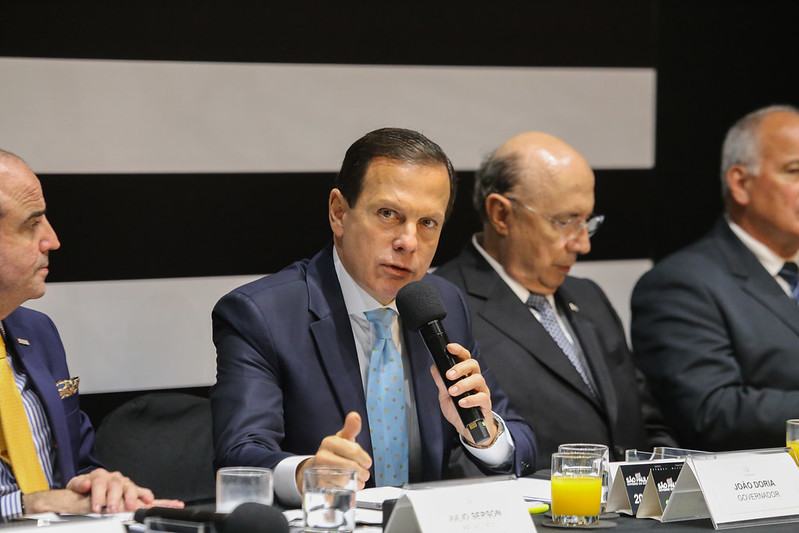 São Paulo – Announced last May, the opening of a commercial office of the São Paulo state government in Dubai has been confirmed for February 10, 2020 at 10 pm. The news was made public by governor João Doria during a press conference for foreign correspondents this Tuesday (3) morning at government seat Palácio dos Bandeirantes. This will be the state’s second international office. The first one opened last August in Shanghai, China – the state’s and Brazil’s biggest trading partner.

The governor said he’ll lead a business mission to the emirates of Dubai and Abu Dhabi from February 7 to 13. Twenty-seven companies from industries including food, logistics, ports, machinery, textiles and supermarkets have confirmed they’ll join in. Registrations will be accepted through December 15, and the government intends to bring along at least 40 businesses. Click here for the regulation and the registration form.

According to Doria, the mission schedule is almost complete, and was created bilaterally. “Our intention with the mission is to open the office and get it running. We’ll start the trip in Dubai and then go to Abu Dhabi. That’s my strategy: getting Brazilian businesspeople with specific interests to the Middle East. Expectations are high. We’ll meet with two of the biggest Middle East investment funds: ADIA (Abu Dhabi Investment Authority) and Mubadala. We’ll have private meetings with the princes of Dubai and Abu Dhabi, as well as with private groups and financial institutions,” the governor said. 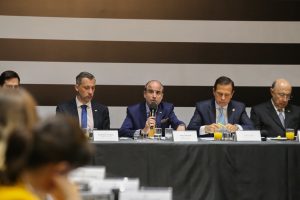 According to São Paulo Investment and Competitiveness Promotion Agency (Invest SP) chairman Wilson Mello, the office already has an address, and the place is undergoing renovation. “It’s in the Dubai port area. The businesspeople’s schedule is almost complete. We have a proposal with B2B sessions, visits to technological areas in both Abu Dhabi and Dubai. Planning for the trip has been ongoing for some time now, and the mission will culminate in our attending Gulfood, which begins on February 16,” Mello said.

The premier Middle East food industry show, Gulfood will run from February 16 to 20 in Dubai. Mello will attend, as will Agriculture and Supply secretary Gustavo Junqueira. Doria won’t be there. The Arab Brazilian Chamber of Commerce will have a pavilion at the show. Since February 2019, the Chamber has had an international office in Dubai.

According to Serson, a trip scheduled for June of this year fell through due to conflicting schedules. “The Arabs are already our partners, and the commercial office in Dubai will act as a hub for the entire Middle East,” he said.

Doria also announced that Silvia Pierson has been named director of the new office. She’s a former head of international operations with the Brazilian Trade and investment Promotion Agency (Apex-Brasil) in Miami, USA. Pierson is not allowed to give interviews yet. 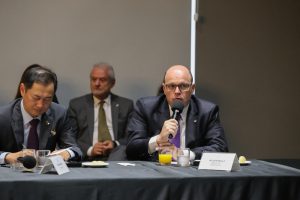 According to Mello, the purpose of the commercial office is to “facilitate deal-making on both directions – for Brazilian companies going out to the Arab world and Middle Eastern financial agents targeting the state of São Paulo.”

A standout feature of the São Paulo state office is the availability of 21 privatization projects, concessions, and public-private partnerships. “These opportunities to Middle East investors aren’t available anywhere else. These are projects in infrastructure, seaports, airports, roads, intercity trains connecting Campinas and São Paulo, and São Paulo metro lines 8 and 9,” said Mello.

The Invest São Paulo chairman believes Dubai was a strategic choice for opening the office and having the mission. “We always observe the vocation of the countries and regions that we go to. When we organized the Dubai/Abu Dhabi mission, we looked at the region and tried to determine where the big opportunities are. First you have your logistics, and Dubai can be used as a hub for the whole region, for product re-export and product finish at the free zones. The region has a very strong logistics potential. And then you have your foodstuffs. Brazil is a food industry powerhouse, and Dubai can be a big vector in food imports,” he said.